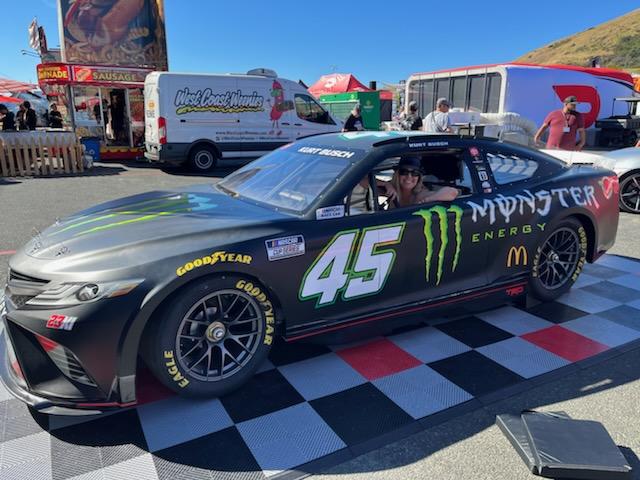 There once was a race car driver who tore up the track and won every race he entered. He left dust in his trail, along with every other car that challenged him. He was quite the champion.

He was all fire and strength and speed with a touch of magic behind the wheel – music followed him, spilling out of his race car everywhere he drove. Blue ribbons and trophies filled all the walls and shelves of his home. He even had fancy glossy photos that he autographed for his adoring fans…when The Driver had time, of course, for he was very busy and also very important. His days were filled with racing and winning and finding new places to display all the awards he received.

This was all well and good until one day, he stopped winning.

Hermes, The Greek God of speed, served as The Driver’s Luck Keeper. He watched and listened to all that went on with The Driver. And, well, he just pushed his luck, too far. So, Hermes took it all back.

The Driver woke one morning to find himself not in his beloved race car but behind the wheel of an Uber, as a driver for hire. He took grandma to doctor appointments, shuttled nameless people who missed the train and were late for work, and chauffeured the occasional person to various social events. He was still in the driver’s seat, mind you. Yet, he lost his fame and fortune. He was at the whim of whomever got into his car.

Well, his powerful, fast race car was transformed into a tiny, non-descript, four-door electric car. The kind that looked and felt like one that drove a kiddie carnival ride track. He hunched over the steering wheel with his knees folded in order to fit in his new driver’s seat.

“Driver, I need to go to the grocery store!” demanded one old matron, as she climbed into the back seat.

“Driver, my son needs to get to soccer practice and home again,” said a very busy professional woman. “His nanny will be with him and she’ll tell me if you get him there, late.”

“Driver, please drop me around the corner from the gala event,” pleaded another fare. “I don’t want anyone to see me in this horrid, tiny car.”

At this point, the driver felt very sorry for himself. He remembered back to his victory laps while holding the checkered flag out of his race car window. He could taste the champagne he’d opened on the track, feeling the bubbles tickling his nose as he was congratulated for winning yet another race.

What was worse, The Driver still didn’t know what he had done to lose his good luck. Yet, away it went – no place good that was for sure. He thought it must be just that someone sent him an ill wish at just the wrong time. That had to be it!

He couldn’t have done anything, himself, to actually push his luck away.

He found himself back at the home of the boy needing a driver to and from soccer practice. Once again, his nanny came along to chaperone the ride.

Before they got in his Uber, The Driver overheard the boy’s mother tell his nanny, “Make sure you keep an eye on my son so that he doesn’t cause any more trouble.”

The boy entered the little car with his head hung, low. Piecing it together, The Driver figured the boy had just been punished for some minor transgression that boys will do – maybe something as despicable as not coming clean about not changing his underwear, daily. Instead of serving as a watchful, judgmental eye, the boy’s nanny did a remarkable thing. She started telling funny stories of when she was his age and, she herself, got in trouble for being silly.

As she talked, the boy laughed about her childish foibles. See, she seemed to say, you’re not so bad. She chose to make sure the boy knew he was loved and that he was okay. The Driver listened and yearned to join in such fun but he didn’t know how.

So instead, he interrupted their conversation.

“We are here, too early,” he announced. “So we should just go home and come back, later.”

“We’re not that early,” the nanny waved him off and returned to laughing with the boy.

This frustrated The Driver. He did not like being dismissed like that; it reminded him of all he’d lost. As the car idled in the parking lot, he decided what to do, next, to interrupt the pair.

“You need to remember your other pair of shoes,” his tone admonishing the boy as he nodded his head to the sneakers cast aside in the back seat because the boy had just donned his soccer cleats.

At this point in the proceedings the Nanny thought the driver was quite funny. Turning to face him from her spot in the passenger’s seat, she addressed The Driver, directly.

“Driver, you are here to drive,” she laughed, in all mock-seriousness. Then she turned her fun onto The Driver, himself.

“Next time, if you want, I will drive and you can take care of the boy.”

The driver could not be mad at the nanny because she was surely teasing him.

“Done,” she said, sternly, yet her eyes were laughing.

The very next day, The Driver was, indeed, called again to deliver the boy and his nanny to and from soccer practice. As soon as they rounded the corner from his home, the nanny called out, and waved her hands over the dashboard as if conjuring magic.

The Driver planned on being professional. He planned to say nothing of their agreement the day prior.

“Why should I stop?” He challenged.

The nanny laughed. “I said stop because we made a deal yesterday. I think you are worried that you may just find out that I’m a better driver than you.”

At that the boy laughed and slapped his knee. “But the real question is, will you be as good a nanny as she is?” he asked. Oh, the challenge was tossed and The Driver could not back down.

So, the nanny slid behind the steering wheel and The Driver became the boy’s nanny on the way to soccer practice.

“What does your nanny do for you?”

“She loves me,” was his simple reply.

The Driver was dumbfounded. He looked wildly in the air as the nanny drove his car. Clearly, she’d driven lots of times but he had never been a nanny.

“How is it simple? What do I do?” Oh, this nanny business was going to be harder than he thought. He really wished he hadn’t pushed his luck as a race car driver. He loved that and he was good at it.

“You’re half-way there, already,” the nanny stopped his train of thought as it sped down the track. “Remember, yesterday, you wanted to make sure we didn’t arrive too early and to be sure to grab his sneakers after putting on his cleats.”

“What was I doing then?”

“You were thinking about what he needed. You thought what was best for him. That’s love, Driver. Oops, I mean Nanny.”

“How will I know what else he needs?”

That seemed simple enough. So, The Driver-now-nanny asked what the boy brought with him. And after a couple of questions, the only thing the boy seemed to forget was a bottle of water.

“I have bottled water in my trunk,” he sighed in relief.

“Thank you,” he said, genuinely, as they left the car after practice. “That was the most fun I’ve had in a long, long time.”

The glow of gratitude lingered inside the car. The Driver felt so good, he took his little ride over to the car wash. He cleaned it, inside and out, until everything sparkled and smelled fresh. Standing back to admire his handiwork, he thought a moment about his race car days and all the people who helped out. All those races he won. They were victories for everyone on his team, whether it was the cook who made meals and tidied the pantry or the man who detailed his car before each race. Everyone.

It wasn’t his burden, alone, to carry. Nor was it entirely his own victory. And, had he thanked them? Not just to say ‘thank you’ but had he expressed his gratitude in ways that were meaningful and honored each of them?

That was it. That was why he pushed his luck away.

So, every time a person entered his car, The Driver donned a new perspective. He became The Nanny. He asked, “How’s your day? What’s happening wherever are you headed? Do you have everything you need?”

From atop Mount Olympus, Hermes was watching.

And, funny. The Driver’s good luck? Well, it came back.

Soon enough, he was sitting in the race car driver’s seat again. Gone was the cramped carnival ride Uber car. He even won a race. But the victory lap was different. He jumped out and let the pit crew boss drive the car around the victory lap, holding the checkered flag, instead of him. In fact, each member of the team took a turn. By the time they were done, the detailer, the cook, and yes, even The Nanny and the boy got a ride.

He thanked them, all.

After that, he always asked.

He asked what they needed. And listened.

As luck would have it, he kept winning races. And, yes, of course, he lived happily ever after.