Seattle, Prohibition, the Great Depression and the Smith Tower 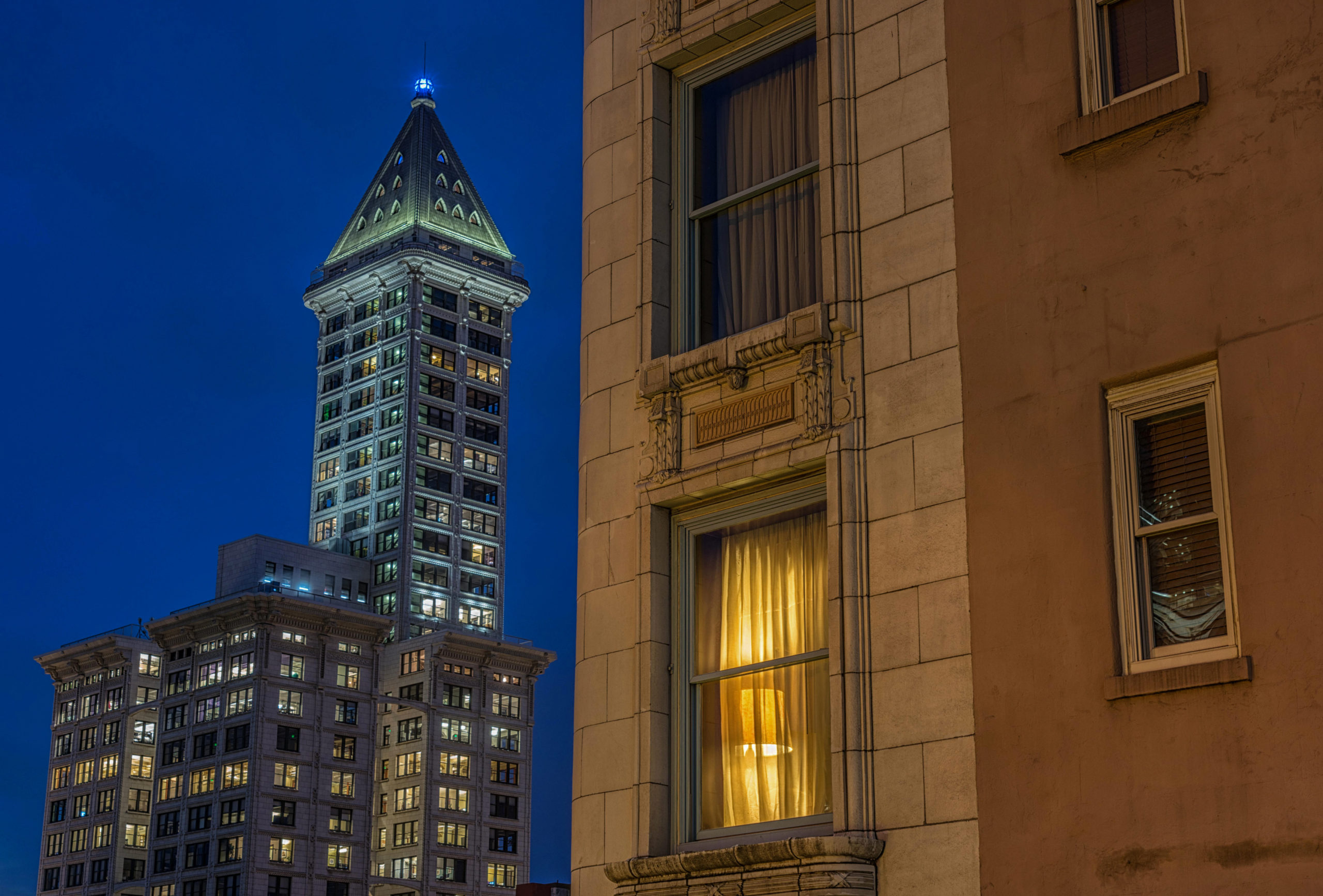 The more I thought of Rose Nicovich and her hundreds of whisky barrels, the more I wondered what life in Puget Sound was like during the waning days of Prohibition just as the Great Depression got underway.

I’d never written a historical fiction and romance before, so I figured I better figure it out.  Historical accuracy is important to me.  As I learned more, I was captivated by about how spot-on my dream was about Rose, her bootleg whisky, and, well, everything.  My journey went from the Internet to the phone and ultimately sent me to The Smith Tower; a Seattle edifice of the time that became a haven for both bootleggers and billionaires.

Seattle was one of the first to get the ball rolling with Prohibition, enacting a statewide ban on the sale and consumption of alcohol on January 1st 1916…Oh snap, who wouldn’t LOVED attending a New Year’s Eve party in the diner at the Smith Tower that year?  If time travel exists, I know where I’m going, first.  Leading up to this new law were obvious signs; painted by a legion of piety, all decrying the lack of morals and impending downfall of their young state.

Don’t get me wrong, Seattle has always been progressive in terms of granting rights, to women in particular.  It was these same women in Washington who got a collective head of steam and led the state’s temperance movement, vilifying alcohol as the root of social decay and a destructive force to marriage and family.  Outlaw an easy-to-produce elixir and throw in the collective desperation of a Great Depression.  It was a foregone conclusion for one to become a bootlegger.

Probably the most important character I met in my journey to understand the Smith Tower and her illustrious people was Joe Teeples, author of In the Shadow of the Smith Tower.  For research, Joe invested a couple years as a Smith Tower elevator operator, docent and guide. Over lunch, the phone and email, he gladly shared all that he learned.  He helped me really know each of these Seattle pioneers and the important role they played in our local history.

By the time prohibition ended, with the passage of the 21st amendment in 1933, Seattle (and the Smith Tower) played host to thousands of people hell-bent on defying the law of the land.  At its height, there were around 4,000 speakeasies in and around town and millions of gallons of bootleg whisky consumed throughout Puget Sound.   Hypocrisy abounded throughout the country and nowhere more specifically than in prohibition-era Seattle.  Through Joe’s introductions, his became a guiding light to help these characters make their way to and from Cottage Bay.

Teeples’ book introduced me to an extended network of real-life characters who played important roles in Prohibition-era Seattle, culminating around the time the Great Depression gets underway.  Through Joe I got to know folks like Rum Runner Roy Olmstead, a Seattle Cop-turned-Bootlegger whose wife, Elsie, hosted a nightly children’s story hour over the radio from the Smith Tower.  It’s said she used her show to broadcast codes warning Roy and his crew about impending police raids on bootleg whisky deliveries throughout Seattle’s waterfront.

She was so good, they never, ever, broke her code and she was never convicted of conspiracy to distribute bootleg whisky.  Rum Runner Roy was not so lucky.

There were other real-life characters that found their way into this story.  Agent Richard Fryant was a real-life expert at wire-tapping and hid out in the bowels of another local building eavesdropping on conversations, ultimately convicting ol’ Rum Runner Roy for his “crimes” of distributing whisky.  As a former peace officer, Roy forbid his crew to carry guns and they were a much different “mob” than what history traditionally holds from that era.  In contrast, Agent Fryant was a particularly bad egg and I thoroughly enjoyed ensuring he did NOT get his man in Cottage Bay.

Another favorite of mine was Hattie Freeman, the Smith Tower Switchboard operator.  I gave her a fictional cousin, Jessie, who served as Cottage Bay’s switchboard operator and police dispatcher.  Those two helpful souls made a powerful and effective team to blunt Agent Fryant’s work in town.

Probably my favorite character ran a speakeasy just up the hill from Smith Tower.  Visiting Joe at the Tower one day, I turned the corner to the ladies room and walked smack-dab into who is now my boyfriend, Doc Hamilton.  Well, really, I bumped into the life-size cut-out of his image.  He stands at the base of the main floor’s beautiful Mexican onyx marble hallway and staircase.  Joe actually took our picture together.

As a black man, in real life Doc Hamilton cut a unique figure in the community—he owned a night club in Seattle during a time when it was hard enough to run a restaurant and speakeasy as a white man.  Doc Hamilton gives up a story to be told more fully in the second book of this series, First Christmas in Cottage Bay, I am now writing.  Doc deserves a spotlight and to be fully known in a history that sometimes (often) sweeps people of color out of the timeline.

Along with these bootleggers and up-n-comers, there were major characters whose personalities came forth in the story.  Women like Bertha Knight Landes, who served as Seattle Mayor from 1926-28 and was the first female mayor of a major American City.  Another Mayor, Frank Edwards, defeated Landes, and was recalled immediately after his second election.  Drama! Oh My.

Louis J. Forbes was yet another real character in Seattle history.  Forbes became Seattle’s Police Chief in 1928 during the Edwards’ administration and served until 1931.  During his tenure, he introduced modern communications, installing trial radios in several patrol cars.  He predicted that a future police force would be completely radio-patrolled.

In our story, Forbes served as host for the area Police Chiefs’ Ball, held in the Dome Ballroom of the Arctic Club, truly in the shadow of the Smith Tower.  I am enchanted with the tiffany-esque Dome Room and know you will be, too.

There are several articles and books that helped me get a good feel for Prohibition and the Great Depression as well as how it impacted Seattle and the Puget Sound area.  Joe’s profile of the Smith Tower served as a guidepost that fueled my fascination with this pivotal era in both national and local history.  I share each story with you hoping you enjoy learning about these people and their places as much as I did.

In the Shadow of the Smith Tower, by Joe Teeples

How dry we were:  Piecing together facts and artifacts from Seattle’s Prohibition era, by Brad Holden, Seattle Times, April 21, 2019

The Roaring Twenties and Prohibition, History.org

Prohibition in the Puget Sound Region (1916-1933), Historylink.org, by Brad Holden

The hidden history of the Arctic Building, by Meg van Huygen, July 20, 2017