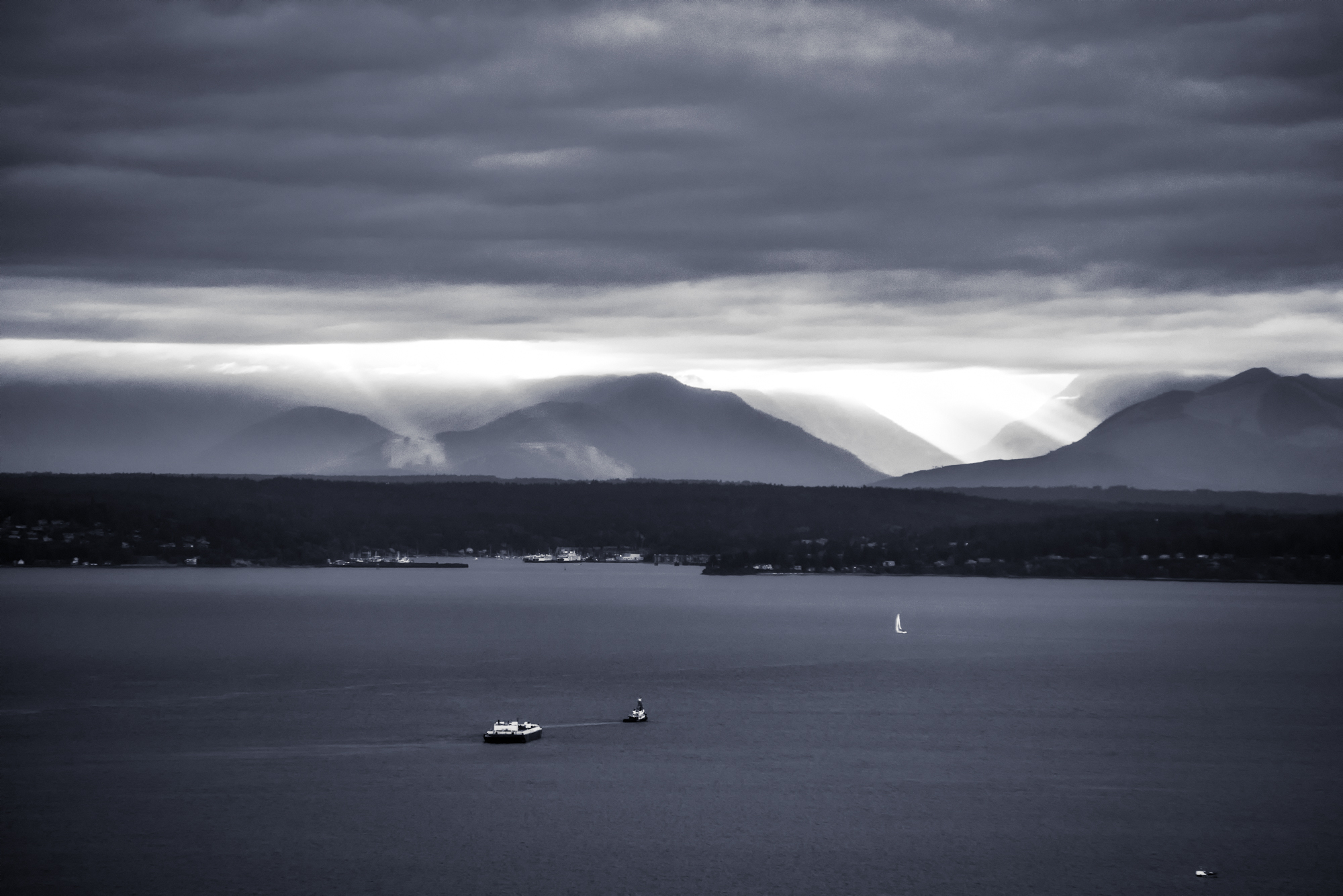 The Second Black Tuesday of the Year

"Set it down wherever Rose says it should go," Sanja Nicovich called down the stairs.

Sanja deemed the red velvet sofa too out of place for their front room. Her husband, Sebastijan, usually called "Seb", and her brother-in-law, Tomo, were pressed into service to stow it in the basement. Everyone was restless this week after Thanksgiving. At the end of October, the Stock Market crashed. It rocked the country on what was already being called Black Tuesday. Now, the country was reeling and their Christmas season didn't seem like it would be so merry and bright this year.

Sanja instinctively knew they all needed something to do today, an otherwise calm Tuesday. Since the Peninsula Hotel paid for their last order of fish with this sofa, instead of cash, it had been cluttering up the house and needed a new place to go. This afternoon was just as good a day as any and Operation Stow-the-Sofa was now well under way.

Sanja and Seb's daughter, Rose, just home from her teaching job at Cottage Bay's school, waited for the trio, pointing to the place in the basement, as if 'X' marked the spot.

"We've been sitting like hens on these milk crates for far too long," she laughed. Once they set it down, she took a seat on the sofa, the scraped one of the wooden crates over and gave it double duty as an ottoman, kicking her feet upon it.

Brown hair streaked from the sun, she wore the same green eyes as her mother. Rose was tall for the time. At age 21, she stood eye to eye with most of the men she graduated with from the University of Washington in June. In 1929, women were rarely attending university for education, much less graduating with a double major, as Rose had done. It was a far cry from where her parents came from, him an immigrant Croatian fisherman and her a former madam and brothel owner.

Both parents were equally proud when she brought her degrees in Library Studies and English home to Cottage Bay. Theirs was a quiet little fishing village tucked into the heart of Puget Sound, just across the water from Tacoma. Rose began teaching this past fall but during the summer her father tutored her so she could complete her apprenticeship in another profession: Bootleg whisky production.

"Well, I know that the milk crates are staying," Seb pointed out and grabbed one of his own, taking a seat next to his daughter. Tomo sat down next to his brother and the trio gazed across the expansive space, beyond where the cement floor became dirt.

Couldn't miss that the two were certainly brothers. They were just two years apart in age, with nearly identical sandy brown hair and brown eyes. As fisherman, the pair were so active there wasn't an ounce of extra girth on their lanky frames. Same was true for Sanja, with platinum highlights just frosting her brown hair, at least that's what she called them instead of plain old grey. Rose loved that about her mother. Sanja served as mother to Rose and her younger brother, Collin, as well as being a surrogate mother to her brother-in-law's daughter and two boys. It kept her busy all day long, yet she seemed ageless.

Everyone's attention was now fixed on the nearly 150 barrels of whiskey incubating where they were quietly stowed over the last few weeks. No one in their waterside community suspected a thing of this average, upstanding family. They were just simple fishermen, of course. At least that was what Seb was hoping everyone would assume. In fact, he had a plan to deliver both fish and whiskey via their purse seiners in the light of day, hiding in plain sight.

It would be quite an accomplishment if he pulled it off, given that whiskey was illegal and as fisherman-turned-bootleggers, they were now officially breaking the law. Desperate times called for desperate measures, Seb reasoned with himself as he stretched his arm. It had been acting up lately and tugging the sofa down the basement steps hadn't helped any.

Sanja saw him flex as she navigated the steps, holding a tray with jelly jars bookending an assortment of cheeses in the middle. She gave him a stern look, as if to say, don't push yourself, but was also mindful of her husband's pride, so she didn't say anything, out loud.

Tomo looked warmly at his sister-in-law and got up to help her with the tray. He pulled over another wooden milk crate, turned it upside down and transformed it into a cocktail table. Her role was firmly established as the matriarch of the family.

"Where are the boys," Tomo wondered aloud to the room. "It's awfully quiet upstairs."

"They're either still playing cards or if it's not raining they might be throwing a game of catch." Sanja had a mental radar for everyone in the family. "Tomo junior, told me Anna will be over a little later because she wanted to study a bit. Some of her nursing classes are pretty tough right now."

Seb got up from his seat, grabbed his glasses and picked up a wine thief on his way to the barrels. He dipped the instrument into a barrel after uncorking it at the top. "Funny that it's called a wine thief," he laughed. "Since it also robs the whiskey barrel."

"We'll call ours a whiskey robber then," laughed Sanja. She sliced up some cheese and handed small chunks, plus bread, over to her seatmates. Turning again toward her husband, Sanja patted the seat next to her -- the sofa was big enough to handle all four of the Nicovich bootleggers. He didn't sit, though. After handing everyone a glass, he held out his hand in a motion to stop.

"Now, hold your horses, everybody," he cautioned. "I've got a second batch for you to taste, side-by-side with this one. I've been dying to sample it now that it's been in the barrel a couple of months."

Tomo sniffed his glass while Seb grabbed four more jelly jars and went further back, along the far wall. "What's this, brother?" he called out.

"You've got bourbon, there, that our Rosie made," said Seb, and he nodded at his daughter. "But she also made a Rye whiskey that we're aging in our basement. Over in yours, we have more bourbon but also some blended whiskey, as an ode to my Canadian fisherman mentor." All together, they had 300 barrels of bootleg whiskey across both basements.

Returning with the other four glasses, now filled, he set them down on the tray atop an upturned milk crate and looked at everyone, expectantly, hands on his hips. They looked doe-eyed back at him, clearly waiting for instruction.

"Well, go on then," he nodded, giving permission. "Stuff won't drink itself."

"Okay boss man," his wife laughed. "Which one do we try first?"

"The bourbon, it's sweeter. Then try the Rye."

The bourbon, boasting sugars from the corn, was indeed sweeter. It was still all full-proof, and very young, but the promise of months in the barrel was savored by each palette. Next came the rye whiskey, and while also new to the wood, it held a bite on the tongue that more than hinted to a delightful spirit.

"You did good, Rosie," her father congratulated her. "You have a talent for this beyond anything I've taught you."

"Well, it is alchemy as much as science," Sanja observed as she sipped from her jelly glass. "And you know our daughter is pretty magical at anything she puts her hand to."

"The student becomes the teacher," Tomo agreed. "This batch is better than any we've done, yet."

Everyone nodded, including Rosie, who savored the fruits of their labor, sipping and smiling. Despite the economy, the lean season, and the fact they were now criminals, she was happy. While people paid for their last catch of the season with things like this red velvet sofa, they would fork over their last dime for a barrel of whiskey.

Things were looking up for the Nicovich clan. Rose mentally began writing a list of things to buy with their illegitimate profits, like new paint for both homes, Anna's school tuition, and maybe a new pair of shoes. Her brown loafers were practical but not so pretty,

A nice glow now covered the room, from more than the hurricane lantern and casement windows. Sebastijan stood and stretched again. His arm still ached.

Beyond the house, the trio could hear laughter and shouting. "The rain must have stopped and the boys are outside playing a game of catch," said Sanja, arching an eyebrow at her husband and Tomo.

"We should join them," Seb said, nodding to his brother.

Tomo nodded his head in agreement. The brothers bounded up the basement steps, through the front door and onto the porch, eager to play a game of catch with their boys.

And that's where Seb clutched his chest and fell. He was dead before he hit the floor.